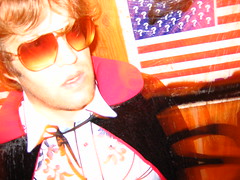 Long story (not very) short? One night in 2003–after killing it in front of audience of about 30 lucky people in Oakland–The Long Winters needed a place to crash, and my wife and I were happy to oblige.

So, they drove their Big Stinky Blue Van over the bridge, slept on our floor, and by breakfast the next morning, it’d become clear to me that I’d provided lodging to a man who was not only very likely a member of my karass–he was also one of the smartest bullshit artists I’d ever met.

Almost eight years later, although I don’t see him nearly as much as I’d like, I still count the guy as one of my best pals ever.

That’s John Roderick. And, I think you need to know about him.

John doesn’t read this site–he’s more of a Twitter person–so I don’t risk feeding his astounding excess of dignity by saying he’s one of the most gifted writers and bon vivants of our generation. He’s just the best. In large part because he’s congenitally incapable of suffering bullshit.

This was never more apparent than the Saturday morning in 2007 when we sat in my back yard and talked about a lot of stuff. Playing guitar, advertising on the web, the evil work of promoters, and why everyone is always trying to shortchange everyone on copper pipe.

That talking became a four-part interview I ran on the late and occasionally lamented The Merlin Show, and, to this day, it’s one of my favorite things I’ve been lucky enough to post to the web.

He’s opinionated and arrogant and undiplomatic and unironically loves Judas Priest–meaning everyone will find at least one thing not to like about him. Despite being hairy and enjoying laying on your bed, John is not exactly a teddy bear.

But, John’s also right a lot. And, he never sands off the edges of his personality or opinions to make you theoretically “like” him. Which, it will come as no surprise to you, is a big reason I love the guy more than a free prime rib dinner.

So, why the jizzfest about that awful jerk, John Roderick?

Because, as I noted the other day on the Twitter, in our first episode of Back to Work I misattributed a line that should have been credited to John. Which in itself is unimportant, except inasmuch as finding that link to correct the error got me watching our 50-some minutes of chatting again. I also received some at-responses and emails that reminded me how much people enjoyed our chat.

But, really it made me realize how much that rambling morning in my back yard still resonates so much with stuff I care a lot about. Independence. Agency. Directness. And, never apologizing for wanting to get paid. Also, guitars and talkative hippies.

I edited all four parts of the video into one big (streamable/downloadable) movie that should make it way easier to watch at a sitting. Should that interest you. Which it may not. Which, as ever, is totally fine, and kind of the point.

But. If you like Dan and my new show (and, seriously—God bless you magnificent bastards who helped briefly make B2W the most popular podcast in the world [gulp]), I think you’ll really like this interview a lot too. I hope so, anyway.

Thus, submitted for your disapproval, permit me to present my four-year-old visit with the acerbic, opinionated, and reportedly unlikeable bullshit artist whom I respect and adore more than just about anybody.

”Video: John Roderick on String Art Owls, Copper Pipe, and Bono’s Boss” was written by Merlin Mann for 43Folders.com and was originally posted on January 21, 2011. Except as noted, it’s ©2010 Merlin Mann and licensed for reuse under CC BY-NC-ND 3.0. “Why a footer?”

‘Godzilla vs Kong’ Likely to Get a Streaming Release, Probably at HBO Max